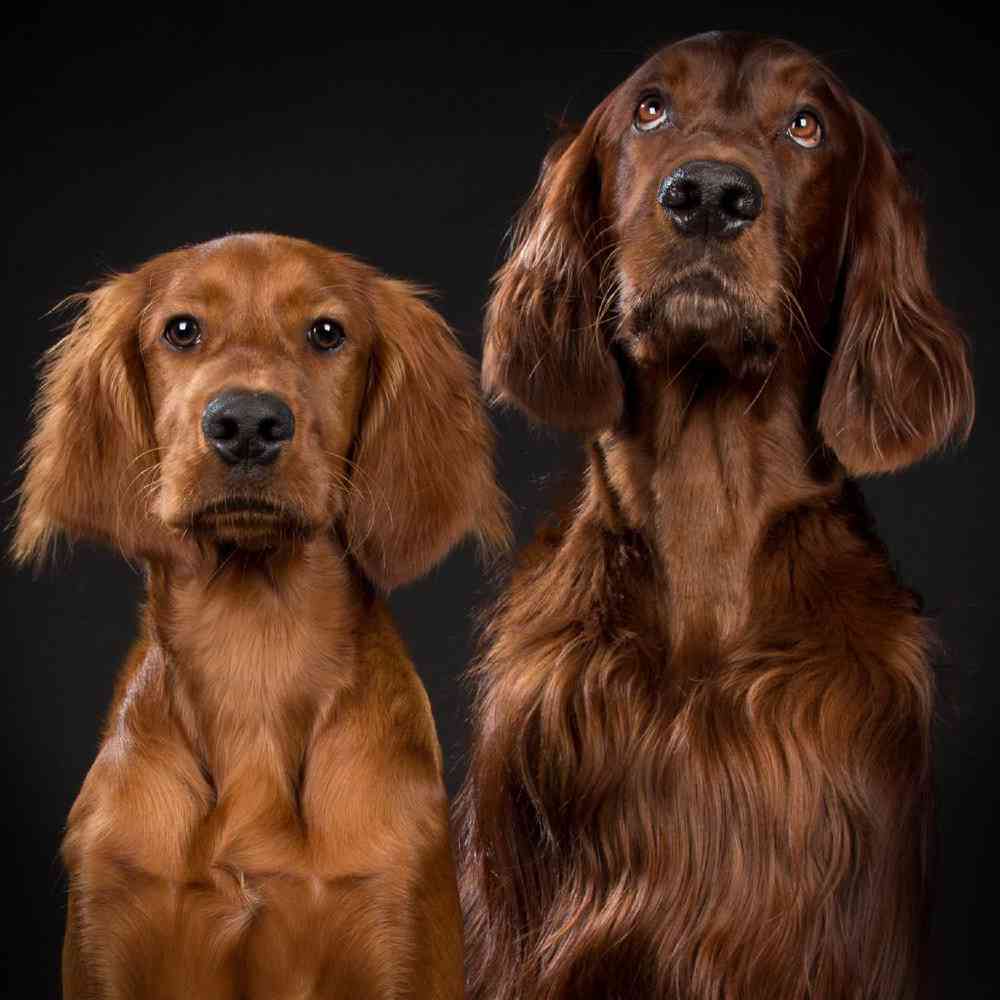 The Irish Setter is a high-spirited gundog known for grace, swiftness, and a flashy red coat. They are famously good family dogs: sweet-tempered companions for the folks, and rollicking playmates and tennis-ball fetchers for the children.

The Irish Setter is an active, aristocratic bird dog, rich red in color, substantial yet elegant in build. Standing over two feet tall at the shoulder, the dog has a straight, fine, glossy coat, longer on ears, chest, tail and back of legs. Afield, the Irish Setter is a swiftmoving hunter; at home, a sweet natured, trainable companion. At their best, the lines of the Irish Setter so satisfy in overall balance that artists have termed it the most beautiful of all dogs. The correct specimen always exhibits balance, whether standing or in motion. Each part of the dog flows and fits smoothly into its neighboring parts without calling attention to itself.

There is no disqualification as to size. The make and fit of all parts and their overall balance in the animal are rated more important. 27 inches at the withers and a show weight of about 70 pounds is considered ideal for the dog; the bitch 25 inches, 60 pounds. Variance beyond an inch up or down is to be discouraged. Proportion-Measuring from the breastbone to rear of thigh and from the top of the withers to the ground, the Irish Setter is slightly longer than it is tall. Substance-All legs sturdy with plenty of bone. Structure in the male reflects masculinity without coarseness. Bitches appear feminine without being slight of bone.

Long and lean, its length at least double the width between the ears. Beauty of head is emphasized by delicate chiseling along the muzzle, around and below the eyes, and along the cheeks. Expression soft, yet alert. Eyes somewhat almond shaped, of medium size, placed rather well apart, neither deep set nor bulging. Color, dark to medium brown. Ears set well back and low, not above level of eye. Leather thin, hanging in a neat fold close to the head, and nearly long enough to reach the nose. The skull is oval when viewed from above or front; very slightly domed when viewed in profile. The brow is raised, showing a distinct stop midway between the tip of the nose and the well-defined occiput (rear point of skull). Thus the nearly level line from occiput to brow is set a little above, and parallel to, the straight and equal line from eye to nose. Muzzle moderately deep, jaws of nearly equal length, the underline of the jaws being almost parallel with the top line of the muzzle. Nose black or chocolate; nostrils wide. Upper lips fairly square but not pendulous. The teeth meet in a scissors bite in which the upper incisors fit closely over the lower, or they may meet evenly.

Neck moderately long, strong but not thick, and slightly arched; free from throatiness and fitting smoothly into the shoulders. Topline of body from withers to tail should be firm and incline slightly downward without sharp drop at the croup. The tail is set on nearly level with the croup as a natural extension of the topline, strong at root, tapering to a fine point, nearly long enough to reach the hock. Carriage straight or curving slightly upward, nearly level with the back. Body sufficiently long to permit a straight and free stride. Chest deep, reaching approximately to the elbows with moderate forechest, extending beyond the point where the shoulder joins the upper arm. Chest is of moderate width so that it does not interfere with forward motion and extends rearwards to well sprung ribs. Loins firm, muscular and of moderate length.

Shoulder blades long, wide, sloping well back, fairly close together at the withers. Upper arm and shoulder blades are approximately the same length, and are joined at sufficient angle to bring the elbows rearward along the brisket in line with the top of the withers. The elbows moving freely, incline neither in nor out. Forelegs straight and sinewy. Strong, nearly straight pastern. Feet rather small, very firm, toes arched and close.

Hindquarters should be wide and powerful with broad, well developed thighs. Hind legs long and muscular from hip to hock; short and perpendicular from hock to ground; well angulated at stifle and hock joints, which, like the elbows, incline neither in nor out. Feet as in front. Angulation of the forequarters and hindquarters should be balanced

Short and fine on head and forelegs. On all other parts of moderate length and flat. Feathering long and silky on ears; on back of forelegs and thighs long and fine, with a pleasing fringe of hair on belly and brisket extending onto the chest. Fringe on tail moderately long and tapering. All coat and feathering as straight and free as possible from curl or wave. The Irish Setter is trimmed for the show ring to emphasize the lean head and clean neck. The top third of the ears and the throat nearly to the breastbone are trimmed. Excess feathering is removed to show the natural outline of the foot. All trimming is done to preserve the natural appearance of the dog.

Mahogany or rich chestnut red with no black. A small amount of white on chest, throat or toes, or a narrow centered streak on skull is not to be penalized.

At the trot the gait is big, very lively, graceful and efficient. At an extended trot the head reaches slightly forward, keeping the dog in balance. The forelegs reach well ahead as if to pull in the ground without giving the appearance of a hackney gait. The hindquarters drive smoothly and with great power. Seen from front or rear, the forelegs, as well as the hind legs below the hock joint, move perpendicularly to the ground, with some tendency towards a single track as speed increases. Structural characteristics which interfere with a straight, true stride are to be penalized.

The Irish Setter has been described by its partisans as the most beautiful of dog breeds. Standing more than two feet at the shoulder, with a substantial yet elegant build, the Irish is famed for a brilliant coat of mahogany or chestnut. Long, sinewy legs and powerful rear drive help to place the Irish among the swiftest of all sporting dogs. The Irish Setter’s lovable personality has endeared the breed to sportsmen and pet owners for more than 200 years. Irish are outgoing dogs who enjoy making friends. These rambunctious redheads are big kids at heart, but they are eager to please and will respond to patient, positive training. They are said to be bold and rugged hunting partners, with a devil-may-care approach to their work.

A setter is a type of dog bred to locate gamebirds by using their keen sense of smell. The setter shows a hunter he’s found birds by “setting” down on his belly. Before the invention of firearms, setters worked in tandem with trained falcons and hunters using nets. Today, setters are gundogs, that is, they work with a hunter toting a rifle. Irish huntsmen of the 1800s bred their sleek, rangy “Red Setters” to move freely and swiftly, the better to cover ground in the wide, flat countryside of the Emerald Isle. By way of contrast, the Irish Setter’s kinsman from Scotland, the Gordon Setter, was built to flush and retrieve game on rocky, punishing terrain and is therefore a heavier-bodied dog that moves at a more deliberate pace. The Irish Setter earned a reputation as an energetic but efficient worker in the bird fields, and, thanks to its eye-catching good looks and graceful gait, has been a big winner in the show ring since the sport’s beginnings in 1870s. Eleven Irish have won the Sporting Group competition at the Westminster Kennel Club show over the years. The most famous Irish Setter of all time, however, was fictional, the title character of Jim Kjelgaard’s 1945 novel “Big Red.” President Richard Nixon’s Irish Setter, King Timahoe, was named for a small town in Ireland that was the homeland of the president’s ancestors.

The Irish Setter is an active, aristocratic bird dog, rich red in color, substantial yet elegant in build. Standing over two feet tall at the shoulder, the dog has a straight, fine, glossy coat, longer on ears, chest, tail and back of legs. Afield, the Irish Setter is a swift-moving hunter; at home, a sweet natured, trainable companion.

The Irish Setter should be fed a high-quality dog food appropriate for the dog’s age (puppy, adult, or senior) and activity level. Learn about which human foods are safe for dogs, and which are not. The breed can experience bloat, a sudden and life-threatening swelling of the abdomen, and owners should educate themselves about its symptoms and what to do should bloat occur. The causes of bloat aren’t fully understood, but experts agree that multiple, small meals and preventing vigorous exercise around mealtimes may help reduce the risk of bloating.

The Irish Setter’s stunning rich-red coat requires moderate grooming to look its best. Irish should be brushed at least twice a week with a pin brush or a soft bristle brush; a long-toothed metal dog comb can also be used to help work out any tangles or mats that may be starting to form. The nails should be trimmed once a month. An occasional bath with a gentle shampoo meant for dogs will help to keep the coat and skin clean and healthy. Grooming sessions are a good time to check the dog all over for any new lumps or skin problems, and to check that the eyes and ears are healthy and trouble free.

Like most Sporting breeds, Irish Setters need plenty of daily exercise. This can come in the form of long daily walks and play sessions with their owners—Irish Setters love to be with their people. The breed also exercises mind and body by participating in canine sports such as obedience, tracking, agility, rally, and other activities that can be enjoyed by both dog and owner.

The Irish Setter is happy, affectionate, and eager to please. He is full of energy and will appreciate having a job to do. Keep training methods consistent but sessions fun and interesting to be sure he does not become bored. He responds best to positive, reward-based training methods, and not well to heavy-handed or harsh corrections. Early socialization and puppy training classes are recommended. Irish Setters excel in canine sports such as hunting, agility, dock diving, rally, tracking, and flyball, and their sensitive nature makes them a natural as therapy and assistance dogs.

Irish Setters are generally healthy dogs, and responsible breeders screen their breeding stock for health conditions such as hip dysplasia and eye disorders. Like other large, deep-chested breeds, Irish Setters can experience bloat, a sudden and life-threatening swelling of the abdomen; owners should educate themselves about its symptoms and what to do should bloat occur. An Irish Setter’s ears should be checked regularly for signs of infection, and the teeth should be brushed often, using a toothpaste formulated for dogs.

Need Puppy Help, Give us a Call!

Puppyland is dedicated to matching the perfect pet with the right family; Stop by our store today!